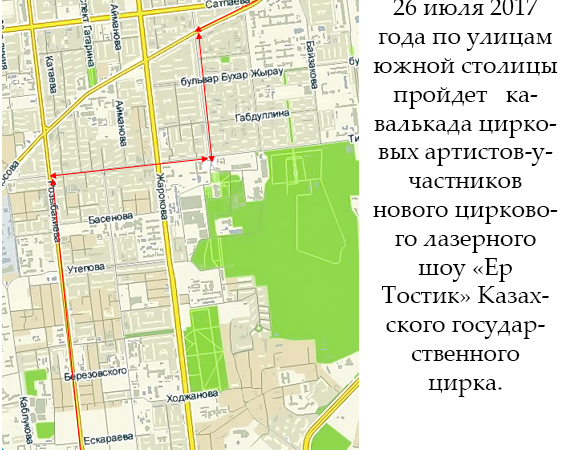 5 years ago admin Comments Off on Dear residents and guests of Almaty!

On 26 July, 2017 on the streets of Almaty the cavalcade of circus artists who are participating in a new circus laser show of the Kazakh State Circus named “Er Tostik” will be held.

The bright circus laser show based on Kazakh folk tales “Er Tostik” was started on July 22 and will be held until August 20.

The route of the parade is attached.

– Zhandosov str. from the circus in a westerly direction to the street Satpayev;

– on Satpayev street in a westerly direction to Auezov;

– according to Auezov street in a southerly direction to the Timiryazev str.;

– Parking on the square in front of the Atakent exhibition centre;

– on Timiryazev str in a westerly direction to Rozybakiyev str;

– Rozybakiev St. in a southerly direction to the SEC “Mega Center”

– Rozybakiev str in a northerly direction to Timiryazev str.;

– on Timiryazeva str in a westerly direction to the Atakent exhibition centre;

– Parking on the square in front of the Atakent exhibition centre;

– according to Auezov street in a northerly direction to Satpayev str;

– Zhandosov str. return to the circus.

On January 25, 2021, artists of the Kazakh State Circus took part in the opening of the Kinopark 4 cinema in the Globus shopping and entertainment center. Congratulations to our partners with the opening of another cinema!

The Bronze Award “For High Performing Excellence and Professionalism” was awarded for the “Air Belts” perfomance under the direction of Olga Demidova, director Marina Redko. This unique circus perfomance... Read More

The XX International Festival of Creative Youth “Shabyt” was completed in Astana. The first place in the nomination “Circus Art” was taken by Anna Demidova with the action “Equilibre... Read More

The date of birth of the Kazakh circus is officially considered as July 24, 1970. It was on this day at the arena of the Saratov circus premiere of... Read More